The History The making of blankets and woolen textiles in Grazalema

During the 18th. and the first part of the 19th centuries, Grazalema was an important town in Cadiz province, mainly owing to the manufacture of its pure wool products. In 1850 there were approximately 9,000 inhabitants in the town and, as a result of its commercial and administrative activities, it was known in the area as ‘Cadiz Chico’ or ‘Little Cadiz’.

In spite of its situation in the mountains, at roughly 900 metres above sea level, Grazalema was not an isolated town languishing in the shadow of the great peak of San Cristobal. Apart from its flourishing wool trade, it was the judicial and administrative centre for Benaocaz, Ubrique, Villaluenga, El Bosque and Benamahoma; this extended area comprised some 20,000 inhabitants.

Blasco Ibanez, Perez Clotet and the brothers Jose and Jesus de las Cuevas made numerous references to the famous capes and blankets of Grazalema. Romero de Torres tells how before the fire which destroyed the Town Hall archive, it had contained a Royal Order issued by Philip V granting privileges to those who made the textiles and the wool products. “One can appreciate therefore” wrote the author “the tremendous importance that this town had for centuries as a manufacturing centre, until only a few years ago when unfortunately the industry fell into such a decline that there are hardly more than two or three factories left which still weave the famous textiles and blankets of Grazalema”. 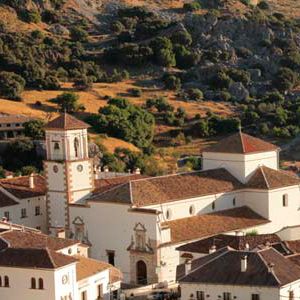 Thirty thousand arrobas (an arroba is approx. 11.5kg) of wool were used in the manufacture of these textiles. There were a number of different auxiliary industries such as dyeing, beating and washing the wool. Some 4,000 people overall were employed in the industry. Sometimes the factories would lend money and raw materials to the workers, who generally worked at home along with the other members of the family. In other instances the townspeople would buy the wool themselves and take it to the factories to make the yarn. They had their own looms at home and the whole family would be involved in the design and the weaving of the cloth and blankets. As soon as the weaving was done they would return to the factories for the beetling and the teasling of the cloth. They would then sell the blankets privately to trades people in the local towns and villages, to exporters or other dealers. Alternatively they would use them to pay their debts. Grazalema is said to be the wettest town in the whole of Spain, and therein lies the secret of its wool, because it is cleaner and more thoroughly washed than any other.

The Spanish wool industry, which in former times exported woollen garments to countries considered to have a sophisticated sense of dress, fell into a lamentable decline, and the final blow was dealt by successive Spanish governments which adopted free trade policies.

The result of this decline was that it was impossible to develop the wool combing industry in Spain. As a result, the wool was used mostly as a raw material which meant that the weight rather than the quality of the wool became the most important factor.

This general decline in the industry and the change in the criteria used to assess the quality of the raw material, took its toll on the national flock which had once produced the best wool in the world. Fortunately, however, the merino breed itself did not suffer since Spain is once again producing the same high quality wool products as it once did.

The sheep farmers neglected the shine and cleanliness of the wool in favour of weight alone. They drove the flocks along dusty tracks and even ensured that the sheepfolds themselves were kept dirty so that the fleeces were impregnated with dust and dirt which considerably increased their weight. In the most extreme cases, once a fleece had been combed out, it yielded only 35% of the purchased weight. 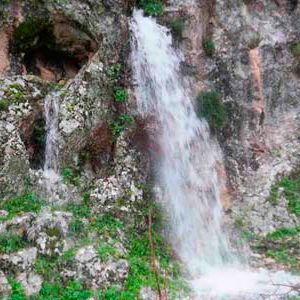 Only the rain in Grazalema prevented such extreme cases of abuse, since the fleeces were often washed ‘naturally’ just before sheering time. In Grazalema a fleece would yield (and still does) 50% wool.

In recent times many neighbouring countries have developed an enthusiasm for natural products: natural fibres, natural colours and hand-crafted methods of production. In other words, a humanising of the product. What is more, it is clear that people are prepared to pay more for products made in this way. This trend has unquestionably helped the development of the Hand- crafted Textiles of Grazalema (Artesania Textil de Grazalema).

Apart from the traditional articles, new designs are being produced using various combinations of materials. There is great potential in collaborating with the local leather craftspeople (handbags in wool and leather for example) where the high relative costs of the hand-crafted materials is amply compensated for by the label on the final product.

The oldest factories were water powered. All the machinery (except the looms themselves of course) was driven by means of a large, iron waterwheel which weighed more than 10,000 kgs. such a waterwheel is still used in our factory and it is in perfect working condition. With a diameter of 10 metres, it takes 25 litres of water per second to drive the wheel, which in turn drives all the machinery used in the blanket-making process.

This process is both interesting and complicated. Firstly the wool is classified by placing it on a large “table” with a net surface. All the larger impurities in the wool fall through the net to the floor. In a single fleece there are some twelve different qualities of wool: the ‘beard’ of the animal, the ‘shoulder’, the ‘flank’ (this is the best quality wool), the ‘ruff’, the ‘back’, the ‘lower shoulder’, the ‘stomach’, the ‘rump’, the ‘forehead’… As well as sorting the wool according to these categories, the breed and quality of the stock are of great importance.

In crude form the wool contains anything from 20% to 70% pure fibre and the rest is water and impurities. The impurities are mostly the natural oils secreted through the skin of the animal which cover the wool fibres which are made of keratin.

As far as the washing of the wool in concerned, in Grazalema an age-old method is still used. This wool is submerged in a cauldron of hot water at a temperature of more than 60°. This loosens the oils. The wool is then rinsed in cold water and the next day it is put out to dry on the large drying platform in front of the factory which was built for this purpose.

When the wool is dry the spinning process begins. The wool is placed on a machine called ‘The Devil’ which has a central cylinder covered with numerous waxed teeth. This separates the wool fibres which have become compacted during the washing process in preparation for the carding process.

The carding machine produces a rough fibre which is twisted on the spinning jenny to produce the finished thread.

The warp is prepared - normally sufficient for twenty blankets - according to the design and size required. Once in place on the loom, weaving begins, leaving a space between each blanket. The loose threads between the blankets are then hand twisted to make the fringes which are characteristic of Grazalema blankets. Each fringe consists of a specific number of threads plaited together and with a knot at the end in a manner unique to Grazalema. This detail alone gives some idea of the care that goes into the manufacture of our blankets.

Afterwards the blankets are beetled and teasled, and they are now ready to go on sale. 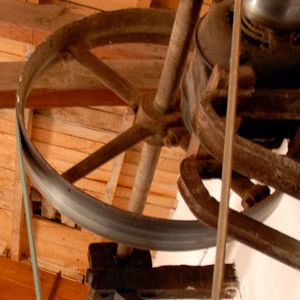 Grazalema blankets are a true example of the craftsman’s art. Famous in times past throughout Spain, they were also exported to Europe and South America.

For several centuries Grazalema stood out in the region as a manufacturing centre. However, during the 1870s the town witnessed a rapid decline due to the influence of industrial manufacturing in urban centres. These outside pressures brought about its ruin. In addition to the economic decline of Cadiz and the financial crisis that Spain was suffering, the town also felt the impact of the English Industrial Revolution. In Cataluña in the first half of the 19th century, an important industrial base was developed and consolidated. The increase in the cotton industry was to change the basis of the Catalan economy. Catalan industrialists visited England and France and modernised their machinery, almost tripling their output of cotton goods between 1830 and 1840.

Studies concerning the development of Catalan industry have tended to emphasise the positive aspects. On the whole these studies have not examined the effect that this industrial expansion had on the rest of Spain. For example, despite references to the protectionist policies of Castile and of the Catalan textile industry, the eminent historian, Vicenz Vives, does not mention the repercussions that these had on the Andalusian economic structure. Rather it has become generally understood, even amongst Andalusians themselves, that the underdevelopment of the Andalusian economy in the 19th. and 20th. centuries was due to a lack of agrarian reform and local patronage. These were not the only causes.

Cataluña was without doubt the fiercest wolf that the sheep of Grazalema had to contend with. Lacking in good communications with the outside world, the town found itself cut off from its markets. The railways which were beginning to be built in Spain in 1848 and other modern methods of transport which the town lacked made it impossible for the local industry to compete due to the high costs of traditional methods of transport. Without new machinery and the ability to bring in cotton or other materials Grazalema's industry decayed rapidly.

Faced with the drop in demand some of the owners closed their factories. Others continued to produce good for the local and provincial markets reducing the number of employees. Thousands of workers were laid off. The situation became desperate. The local authorities were bankrupted and the help received from the provincial capital was minimal. In the second half of the 19th. century Grazalema exported labour instead of blankets. Emigration was on a huge scale.

Workers left for the different towns and cities of Spain and also went abroad to California, Cuba, Argentina, Puerto Rico and even Hawaii. Grazalema had become another victim of the process of industrialisation which was transforming the north of Spain.